I admit it, I subscribe to Paramount+ solely for the Star Trek. Watching Strange New Worlds, set as it is in the time of the original Star Trek series of the 1960s, set me awash with childhood memories of rerun Star Trek marathons on my local television station. But it also struck me how the issues raised in the original show are adamantly still with us.

The creator of Star Trek, Gene Roddenberry, desired to produce a show about justice and the inequities in his world. He knew the censors — active in the 1960s — would balk at such an ambition, so he took his social-justice show and plunked it into outer space, disguising it as science fiction. And though the original Star Trek lasted a mere three seasons, it deliberately broke new ground in a myriad of ways designed to obliterate, for example, racial and political prejudice, it became part of American shared culture, and remains a cultural phenomenon.

Strange New Worlds continues the thought-provoking, socially conscientious tradition of Star Trek. It’s set at a time during which the Romulans are still our enemies. And watching it, I was struck by how Muslims of today are treated like the Romulans at the time of Captain Kirk (my first crush): they are little known, little understood, mysterious and shadowy and suspect, assumed to be primitive until they attack, and thought to be barbarously governed by rules of violence and nothing else. No human has ever seen or spoken to a Romulan, though this hasn’t stopped the stereotypes. And, of course, most Americans even today report never having met a Muslim.

Take a few examples: it is not un-Islamic to be transgender, and the countries of over half the Muslims in the world recognize at least three and up to five genders; Islamic law always allows for abortion in cases of danger to the mother’s life and, though rules vary, has historically generally allowed abortion in the first trimester and has been more lenient than many of US state laws today; Muslim women were given more rights in the 6th century than Englishwomen would have for another 1000 years afterwards; in the modern era at least fourteen Muslim women had been heads of state (that’s presidents or prime ministers!) of Muslim populations; and every historical Islamic civilization — before Muslims lands were carved into nation-states by colonizers — was a multireligious and multicultural civilization that allowed non-Muslims to retain their religion and culture.

I intend no white-washing: nothing is ever perfect, including Christian civilization (which is one of the reasons Bridgerton drives me crazy, implying that historical English culture and law embraced racial equality). But Islamic civilization was historically more diverse and multireligious than most. Yet, Islam, Muslims, and historical Islamic civilization and modern Muslim-majority countries are still the Romulans of the modern world: completely shadowed with bogeyman perceptions.

Cultural and historical frameworks are powerful. They focus the world through lenses we install for ourselves. In the United States and Europe, Islam has always been viewed through the Western Medieval Christian lens of the enemy, which gives rise to stereotypes that infuse our textbooks, narratives, film and television, English-speaking internet (which is overwhelmingly Islamophobic — how could it not be, given the vast majority of non-Muslims — most of whom report negative perceptions of Islam — contributing to it?), our artwork, our judicial system, and our literature. Conditioning comes from everywhere and is normalized. Implicit bias is a thing, people! Explicit bias, as well.

So watch Star Trek, not for education, but because it’s fun and thought-provoking. But do attend to the racial stereotypes therein. They’re still with us, and they still need to be combated. 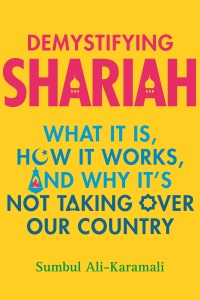